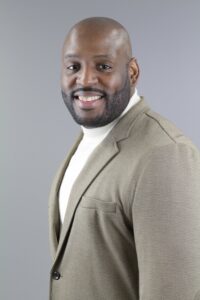 Apostle James D. Holiday Sr. started his journey in ministry June 30, 1994 and since then has ministered on platforms throughout the United States and Africa. He is a Chicago native that holds a Bachelor’s Degree in Christian Education and a Master’s Degree in divinity. James Holiday is a published author and devoted husband to Nicole A. Holiday; he is also the proud father of J.D & Nicholas.

In September 2009 Apostle Holiday obeyed Gods voice and established Word of Change Christian Fellowship and since its inception has gained great momentum. Many miracles signs and wonders are being performed under his oversight at Word of Change, souls are being saved and lives are changed one word at a time. As an apostolic leader, he has raised up several sons & daughters in ministry that are relentless in establishing and advancing Gods Kingdom.

There is no doubt he is an anointed preacher & teacher of the word and has a strong Apostolic/Prophetic grace on his life to declare present truth; his passion for the things of God fuel his efforts to advance, establish and pioneer in this season. In January 2017, Apostle Holiday accepted the charge to plant and establish the fourth of five total Rivers of Living Water branches in the state of Texas. He and his team are strategic and intentional in their endeavors to impact the Dallas/DFW Region for the Kingdom of God

Any cookies that may not be particularly necessary for the website to function and is used specifically to collect user personal data via analytics, ads, other embedded contents are termed as non-necessary cookies. It is mandatory to procure user consent prior to running these cookies on your website.